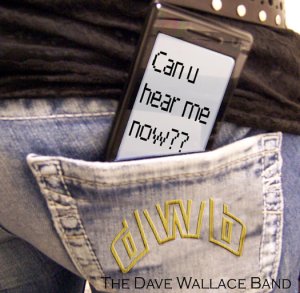 The Dave Wallace Band started off as a side project for founder and frontman Dave Wallace, who had higher musical hopes than just performing as Dorian Grey of the sensational Chicago sleeze band Thorn Fetish. Having a myriad of musical influences and wanting to wade in them without restraint, Wallace began writing a solo cd, combining his eclectic influences into an inescapable, much needed rock and roll revival. Wallace doesn’t have to be Dorian Grey, but can dive into different parts of himself and reveal some real rock: the type of authentic, thoughtful, untechnological music that is missing in mainstream.

On their debut cd “Can You Hear Me Now?”, the Dave Wallace Band delivers a delightful dish of well-balanced music. The band, which includes members Dave Wallace on lead vocals and guitar, Ryan Heath on drums and vocals, Melissa Grantham on vocals and keyboards, Shawn Benge on lead guitar and vocals and Nate Lineberry on bass, are fueling up for their first live show which will be Saturday April 10th at 9 P.M. at the Charleyhorse in Munster, IN. Bringing rock back in a fairy tale fashion, the DWB is restoring rock and reminding us all that it’s not just something that existed once upon a time. Music is a pure, powerful, potent force that has not been forgotten for the automation and autotone that seems to be airing and for some of us is just unacceptable. Rock and Roll will never die, if the DWB have anything to do with it, despite the toll technology has troubled musicians with.

What started out as a side project has metamorphed into a musical masterpiece. The sundry of songs offers something for everyone. The DWB prove how powerful music can be, especially when it’s personal. It is not just words over noise, but a gallant, gracious gift of music that’s been missing with lyrics that are relevant and relatable. It showcases a skilled spectrum, from slower country crooning songs like “Text Message,” which sadly says “the text message has replaced the love letter,” to fun Friday night feel goods like “Party @ DOc’s House,” in which they freely flaunt “And we’re all gonna be just fine/And we’re having a damn good time/At the end of the day let the world pass away/Cause we’re having the time of our lives,” to head-banging hits like my personal favorite “Life Aint Easy,” in which the whole song is a significant story: Suzie goes to college, struggling day by day/Drowning in the debt from all the bills she pays/She’s making extra money when she’s swinging from the pole/Doing what she can to get her ass out of the hole/Her little brother, Johnny’s in a punk rock band/He’s trying to make it big while sleeping in a van/He’s giving it his all but it wears him down/Cuz everyday he’s waking in a different town/An Mother’s all alone wondering where her children are/She’s sitting by the phone hoping they’re not far/Life Aint easy for the runway queen/Life Aint Easy for the punk rock teen/Life Aint Easy for the single mom/Life aint easy for anyone/Brian works the steel mills; the daily grind/Taking care of wife and kids is on his mind/He gave up on his dreams, working doubles everyday/He wonders what it takes for him to catch a break/And now his wife is leaving cuz he’s never at home/He’s crying out to Jesus, but he’s still alone/Life aint easy for the family plan/Life aint easy for the blue collar man/Life aint easy for the only son/Life aint easy for anyone/Life aint easy on the far side of town/Life aint easy through the ups and the downs/Life aint easy living under the sun/Life aint easy for anyone.” Dave Wallace was delightful enough to dedicate some time to talk with me:

Sara Fincham: When did the transformation from a side project to an actual cd occur— was there a moment when you knew it had become more, or was it even your decision—was it more of a fan-driven process that influenced you to release your new work?

Dave Wallace: I think it was as the recording was happening. I had demo’d the songs myself at home, and thought it was gonna be pretty cool; something different. But as the songs took life in the actual studio, I really believed I had something special here. I just really felt like this needed to be heard live and became really excited about the possiblities.

SF: What kind of difference did Ryan bring to your music—was it just support, or something much more than that —how influential was he?

DW: Ryan was huge! I’m used to having my own ideas and just running straight with those. But I really appreciate Ryan’s talent, so I wanted to bounce ideas off of him and hear his as well. It made a huge difference. Since Ryan was the one who recorded the cd, as well as played on it, he would try different things while I wasnt there, such as vocal harmonies, and then let me hear it later. It totally changed the sound from a good song to a great song!

SF: What or who do you think is accountable for forgetting about rock and roll—do you think artists just don’t make authentic music anymore or do you think the market has just become too apathetic as to what kind of music is fed to them, or both?

DW: Its definitely both. As always, someone gets an original idea, and then a million other bands have to copy. Metal has become flooded with growling screaming bands, and calling themselves hardcore, or some type of “core”. Then there’s rap, which displays no signs of musical talent, except for the guy who actually produced the music, but doesnt get any credit. Now they are using computer automation to make it seem like these people can sing, when they actually cant. Its just very disappointing. On the other hand, the masses are always willing to eat whatever is fed to them.

SF: Speaking of this technological takeover that we seem to be undergoing, I just got back from an environmental education conference and one way they’re trying to get more kids involved, to try and make being environmental “cool,” is that they’re also introducing all this time-saving technology and I was actually kind of disappointed that they’re trying to make something more appealing by making it less time consuming, when I think the process is important—to take the time to see the changes, to see the end product of a project other than just instant results. I think if kids aren’t interested in nature a digital pen isn’t going to suddenly suck them in—what they need to do is spend MORE TIME in nature to appreciate it, but this is just my soap box tangent and really irrelevant to this interview, but I guess my question is what do you think the advantages and disadvantages of technology in music are (I love your song “Text Message,” by the way. So true. I think something that is supposed to make us more connected, technology, is actually making us more disconnected from humanity than ever.) But anyway this is your question to answer!

DW: Soapbox indeed! By the way, I’m a nature lover myself. Love camping and hiking, and wildlife, though I wouldnt really call myself a tree hugger, hahah. As for technology, yes there are advantages, such as: this interview is made simpler. The internet is cool, and so is my new Droid telephone. But yes, we are pulled away from social interaction and as a result, the live music scene is definitely hurting. people dont wanna go out and do anything. Its making us lazy and weak.

SF: Is it harder to just be one track, one character, such as Dorian Grey, or is it harder to show all the sides of yourself and why?

DW: Wow, good question. I suppose its easy to act like Dorian Grey. I can be a total asshole that way! But it’s not really me. Yes, its absolutely harder to expose yourself in music. Fortunately, as I grow older and more apathetic, I’m not too worried about what people think of me…too much.

SF: Your music really offers something for everyone—how important was that to you when writing the record, or was it actually not a priority and just happened to have such a balance of music?

DW: Melody is what its all about for me. Catchy choruses, I love that! I wanted to have a variety, although some of it was by accident. “Text Message” is a great example. I just thought I wrote a ballad. I didnt know it would end up sounding like a country song, especially since I’ve never owned a single country album. But hey, if it wins over some country music fans, so much the better!!

SF: Your first live show is upcoming! How are preparations going and what is the attitude of the band like looking forward to it?

DW: Looking forward to it! Its gonna start with me just playing acousticly by myself and after about a half hour, the full band will come in. So its gonna make for a nice 2 hour set.

SF: I struggle with the disappointment of buying a cd and the only good song is the radio hit, but you’ve managed to make a well-rounded effort. DO you focus more on the song(s) that you know will sell, or do you put more emphasis on the songs that maybe aren’t radio ready but still good songs in their own right?

DW: Well, the songs on the cd are all I wrote…well, at the time. I have a few more now. But thats just how it turned out, so I appreciate you feeling its well rounded!

SF: What’s your favorite lyric that you’ve written and also that someone else has written?

DW: Hmm, thats tough. Of my own, I guess the section of “Text Message” that says, “I’m ok to fade away if I can only leave my mark/Like a shooting star that soon burns out, but first lights up the dark/I’m ok if you forget my name, just keep singing my song.” As far as favorite song lyrics from someone else, thats tough. Pick any song by Butch Walker and I’m cool with that!