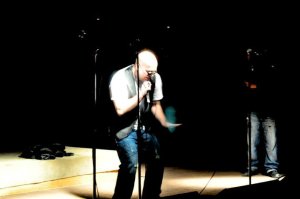 With so many approaches available to alter a voice in the music industry, it’s refreshing to hear someone who can really sing.  Auto-tune makes an artist so anonymous that anyone could sing that song.  Songs on the radio sound so robotic and unrealistic that it’s a disappointment to turn on the dial.  In a sky full of supposed stars, Jeremy Leonard is one of the few that actually shines.

Having already accomplished a lot of acclamation, Leonard’s luminosity is just beginning to burn.  His video for “Let it Go” was featured on the front page of vladtv.com, one of the biggest hip-hop video websites on the net.  On January 14th Jeremy had the album release of his fast-rising record “Out of The Shadows,” which features the first single “Get It” that has  already been advertised on the award winning hip-hop site YoRaps.  He also recently won the first round of the “Golden Voice for the Grammys” competition on Columbus’s #1 Rated morning talk show “The Morning Zoo with Dave and Jimmy.”

Even from far away, it is possible to see Leonard’s bright light.  He doesn’t need darkness to dazzle.  From Martins Ferry, Ohio, Leonard’s gift certainly gleams.  He has such a smooth, savvy sound and a rare radiance that makes him impossible to miss.  Jeremy Leonard is a celestial star!

Sara Fincham:   Out of the Shadows I would assume is a symbolic title. What does it mean to you?

Jeremy Leonard:  “Out of the Shadows” means a lot to me. It’s my journey from being down in a stale mate, to finally seeing my way out of that dark place to the light. It’s kind of like a re-birth to music.

SF:   Now that the record’s out is the hard part over, or is this when the work really begins?

JL:  This is where the work really begins. This is when you have to sell it to people that do not know who you are and make them feel you. Making the album was fun, this part is the trying time, the sleepless nights, the constant promotion. It’s also kind of fun in its own way.

SF:   How crucial is it to have hometown support – to establish a fan base as a foundation for the future?

SF:   As exciting as your first cd is, is it an equal amount of pressure?

JL:  Yes, the pressure to have a great CD out of the gate is crazy. I mean you want people to respect you and know you are serious about your music. They always say the first impression is EVERYTHING, so you want to make a great FIRST IMPRESSION.

SF:   Was it difficult to do it right – to make the kind of record you wanted to record, or was it just what you predicted?

JL:  “Out of the Shadows” is a record that I was just feeling the whole time. I believe as I went through the album, my writing improved and improved. There are songs that I recorded at the beginning of this process that never came close to making the album by the end. So I believe that I just let it flow and it turned out great.

SF:   Before the cd, when you did shows, how did you market yourself? Did you do originals, or was it mostly cover songs?

JL:  I have always had songs that I have written that I performed, so I would just market them as a “single” and then base my performance around that. I would do some covers, but not a whole lot. I still, during my shows, like to do a cover song, if not just the first verse to keep the party going. Everyone loves rocking to your songs mixed into a song on the radio or a song they love, it brings you close to that music thus making you close to the fans.

SF:   What are some of the things you learned from the beginning of this prestigious process to its exciting end?

JL:  The most important thing that I have learned during this process is to never sell yourself short. If you do not like something you have done, then scrap it and put do something better. Don’t settle for second best. Also, I have learned that the only way you are going to get a head is to GRIND. Everything you do, you are doing for your future so you better go at it FULL GO or someone is going to pass you. I am a part of a really good team, WATTSYMUSIC, who never sugarcoat anything and push me to be the ABSOLUTE best. They are my family. They will never let me falter in my GRIND and if I stray off my path, they are right there to kick me back onto the straight and narrow.