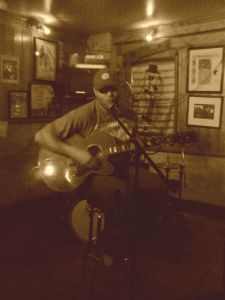 It’s not often that I miss a musical opportunity.  If I see someone on a stage I immediately inquire for their information.  If what I hear has potential I politely put the performer on my list of people to peruse.  In the case of Billy Litman, it took me several months just to see him a second time and navigate his name.

The first time I was fortunate enough to find Billy I was at the bar to see someone else’s show.  Whilst interviewing this person of interest I was directly distracted  by the song coming from the stage.  Someone was playing an acoustic version of my favorite Michael Jackson song, “The Way You Make Me Feel.”  At the time I didn’t take advantage of the acoustic artist, but the next morning all I could think about was the boy in the baseball cap who captivated and called to me.

I interrogated all the bar locals about this mystery musician. It was like I was playing a game of Clue.  Every piece of information I was provided with narrowed down my list of suspects until I put together all the pieces of the puzzle.  I finally figured out it was Billy Littman at Down on Main with an acoustic guitar!

Several weeks later I got a second chance to see the sly singer on stage and finally bring what I had found months prior to fruition.  Ever the modest musician, one of the first quotes that came from him was, “I’m decent, but my sister is the real musician.”  Talented and tactful!  Billy Litman grew up in a talented triad of a family.  Not only is his sister Brianna a superb singer who sang with Matt Heusel of The Trainjumpers and in their own band, Humble Sacrifice, but Billy’s aunt is a retired music teacher.

“I think that’s where my deep appreciation for music grew. My brother, sister, and I spent a lot of time in her house as kids. Around the same time I was picking up the guitar…I picked up an out of tune four-string acoustic when I was 15 and fell in love with the sounds I could make. My father bought me the guitar I play today in 2002 –  an acoustic/electric Gibson L-4A (Sunburst Series). Its the only possession I hold close to my heart.”

Billy also honors and pays homage to the local legends.  “Local musicians have always been an inspiration to me. I wanted to play guitar like Mark Gorby and Jason Trueman or play the drums like Dave Snyder, maybe a voice like Adrian Niles. These locals are the musicians I grew up idolizing.”

It’s no surprise, then, that Billy frequents the bar that all of his idols inhabit, singing on a stool by himself.   Although he does have “favorite bands and voices…I’ve always loved Nat King Cole, Stephen Bishop, Chris Cornell, Joni Mitchell, Jeff Buckley, and Shannon Hoon of Blind Melon, just to name a few, I have respect for all kinds of music, everything from Spandau Ballet and ELO to Michael Jackson and the Roots.  [But] it’s always been important for me to find my own sound and not get too caught up in covering celebrity music. Music to me means freedom. The freedom to express love and sorrow, the freedom to hide away or be seen, but most of all the freedom to be myself.”

Seeing Billy belt out his best, it’s frustrating to fathom that he has “only been playing in public for a couple years out of fear of rejection and stage fright.”  That fear was fanned out by his family, as “my sister gave me the best advice when playing in front of a crowd –  ‘For every person that hates your music, there’s always five more people that love what u do.’ I always try to remember that before I play.”  When it comes to the guessing game of Billy Littman, we are all winners in the end!  Game over!

Down on Main Street