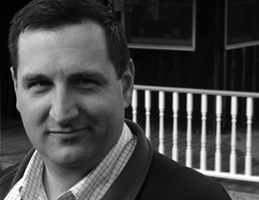 I spend most of my nights “working” – meeting musicians and making memories at local open mic nights.  The crowd is always consistent and I see the same people perform passionately and put on a show every week.  I play the same people at pool and am familiar with a lot of the faces that find their way there as well.  One particular night, when I walked in the door, I saw someone I didn’t readily recognize – Michael Yolch had added his name to the lovely list of open mic music-makers.

“I got started in music back in the 3rd grade when I took up the snare drum. I have not-so-fond memories of dragging my snare drum case through the snow for lessons…I went on to play the drums in marching, concert and jazz bands, respectively,” he shares.  “I was drenched in music from very early on…my parents listened to tons of classic music (which was new back then.) Jim Croce, Simon and Garfunkel, Bee Gees, Cat Stevens, Elvis, Merle Haggard and the list goes on. My sister, who is 5 years my senior, listened to everything else – Heart, Van Halen, Frampton, Fleetwood Mac, AC/DC,  etc.   So, a very eclectic musical upbringing.”

“At the age of 16, my buddy taught me one song on the guitar and that was it. I have since learned to play numerous styles on the guitar – Blues, Jazz, Country, Classical, Metal, you name it.”  Although Michael takes music very seriously, “I am relentlessly passionate about music.  Besides love, it’s really the only thing that every single one of the 6 billion of us on Earth can relate to in some form or another,” he admits his CD, that is cleverly called, in a wonderful wordplay, “Smiles and Tribulations,” “is mostly a serious musician NOT taking himself too seriously. A very different album of just good, clean, fun. I understand that I don’t have a voice like Vince Gill and don’t really need to for this genre of music…I wanted to do an album of whimsical lyrics that people could just listen to and be cheered up a little. Tap a toe and sing along.”

“Smiles and Tribulations” is out now, and Michael kindly brought some copies with him to open mic night.  He hadn’t played live since 1998 and wanted to rid himself of any rustiness.  Not only did he negate any nerves he had about about being back on stage, but he slayed during his set, and found a few new fans, including me.  Later in the week I saw him sitting in the audience at a local show, showing support, and my respect for him rose even more.  Michael is certainly going to be busy for a while, but he took some time to talk.

Sara Fincham:  You play drums and guitar, so when you record, do you do both instruments, or do you have a band?

Michael Yolch:  On this album, I wrote, produced, recorded and played every sound you hear. All acoustic and electric guitars, including bass, vocals, and all percussion.

SF:  What drew you to drums in the first place – was it a parental push to play them in the 3rd grade, or were you drawn to them on your own?

MY:  I was born to play I think! My parents always supported it but never pushed it. They bought me little drum sets while growing up, and a more serious set when I was a teenager. I remember being in awe of legendary Jazz drummer Buddy Rich when he was on Johnny Carson. And, of course, I thought Peter Criss of KISS was awesome when I was a kid! I now own a set of Roland drums that keep my chops up.

SF:  It has been said that it is much harder to learn things when you’re older as compared to when you’re young.  Was it harder to pick up an instrument, the guitar, at a little bit of an older age, compared to your drum lessons, or was it equally a challenge for both instruments?

MY: To me, it’s about how “passionate” you are about a specific instrument. By the time I was 16, I had developed a passion for so much of the music that was played on guitar that I worked incredibly hard to play everything as well as I could because I LOVED it. Also, by 16, you can be a little more mature to appreciate some of the nuances of an instrument such as touch, feel, tone, vibrato, etc.

SF:  What was that one song your buddy taught you, and do you have a style that you prefer to play over the others?

MY: The very first song I learned was “The Break-Up Song” by The Greg Kihn Band. Everyone knows that song but not by name usually. That was followed by “Don’t Fear the Reaper” (Moody Blues) and “Long Cool Woman in a Black Dress” (The Hollies). I probably enjoy playing Blues more than anything. When you have a killer tone set up in your amp, you can just bend a string and it rips your heart out.

SF:  We know what your parents and your sister listen to, but what did you listen to as a child?  And what do you listen to now? How has your musical taste changed over the years?  Did you go through “phases?”

MY: Great question! EVERY musician should learn, not only to appreciate numerous genres of music but, to play them as well. It makes you an incredibly well-rounded musician. I was VERY fortunate to have a mentor that taught me everything from Jim Croce to C.C.R. to Hendrix, Zeppelin, RUSH, Segovia, The Dead Kennedy’s and the list goes on. From 16-20, I played mostly all rock… Scorpions, RUSH, Iron Maiden, AC/DC, etc. But as I matured as a person and musician, I found a great deal more satisfaction in playing much more complicated, emotional or beautiful things such as Blues, Classical and very complex folk finger-style, etc.

These days, I have well over 6,000 songs on my iPod and I like everything on it. At any given moment I could be listening to Alanis Morrisette, Metallica, Merle Haggard, Sir Mix-A-Lot, Andrea Bocelli or a Bach violin concerto and appreciate them all for different reasons. I also spend a LOT of time looking into Indie musicians from all over the world. The very best music NEVER gets played on the radio!

SF:  When it comes to not taking yourself too seriously – does that just apply to lyrics?  Do you just write more upbeat, funny stuff, or is it an all-around decision to stop being so serious?

MY: You ask the BEST questions! I honestly could have come out with several different albums. I could have just recorded a Blues album that would blow your head off (which may be next). Or maybe a very serious traditional Country album where I was much more serious about my vocal performance. I could have done a brutal solo finger picking album, a heavy metal album… whatever!

All the songs on “Smiles and Tribulations” just came one after the other so effortlessly that I decided to record it. All I want to do is play LIVE and hopefully bring a smile to someone who needs it most with this album, and I wanted to do an album that was very different than what you typically hear out there. I mean, who else has a lyric that says “she boot him in the flipper, now his voice is much too high?”

SF:  One of the things you mentioned to me was that you wanted to “really help someone if I can musically.”  How important is it to help each other out?  And who has helped you the most musically, and why?

MY: You’re very bright. If I happen upon someone with a very special musical talent, I do whatever I can to help them out. Whether it’s lessons, advice, encouragement, recording them for free or helping them get the equipment they need, I do my best to help them along. I’ve given away some of my own equipment to people, bought total strangers stuff at music stores, etc. Years ago when I was down to literally the last $14 dollars to my name, I gave $7 of it to a homeless guy who needed a room at a shelter that night. No pat on my back at all. I’m just wired to try to love my neighbor.

David Meyers is the friend I grew up with who took the time to show me some things on the guitar when I knew nothing. If it weren’t for him, I may have never even tried the guitar. He’s the main reason I was able to do so much music over the last 27 years. I’m forever grateful for him.

At the end of the day, music inspires, motivates, moves and heals people. If I can help someone along that will write, sing or play something that does that for others, I’m all in.