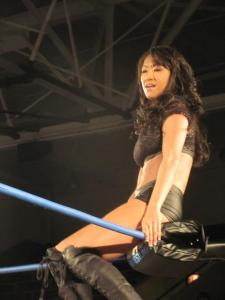 I know what you’re thinking – I’m a little obsessed with professional wrestling.  It’s true.  I can confirm this.  I have been since I was 7.  See my previous post, about the last event I went to and my little blurb that didn’t even begin to break down the immeasurable impact HBK had on my wrestling heart.

To not be redundant and repeat my past post, it’s safe to say the TNA Knockouts are by far my favorite all-around female athletes.  Not only do they not all adhere to the same appearance, they also each have an exclusive athletic approach.  Whether you like pure power or aerial acrobats, a firm friendship or a rousing rivalry, the good girls or the bad bitches, the ones who win with class or the ones who win by con, there’s a Knockout niche for all of us.  Suppose you like to see Angelina Love give the Botox Injection or Break a Bitch, perhaps you’re a Widows Peak Freak and like the TNT tag-team of Tara and Tessmacher, maybe you’re Hardcore Country like Mickie James, can’t get enough of Christy Hemme and So-Cal Val, are under Winter’s spell, opt for ODB or Traci Brooks, want to Salsa with Sarita and get rowdy with Rosita, cheer for the ultimate underdog people’s champ, Velvet Sky,  tune in to hear what mean things Madison Rayne, 1/2 of the Knockouts Champions, will mention on the mic, or get a glance of Gail Kim, 1/2 of the Knockouts Champions and current Knockouts Champion,  in action.

I will unashamedly admit that I worked a night-shift, slept for two hours, drove four hours to see a show specifically for the five Knockouts that were touring, only to drive four hours back afterward to work another night-shift, and it was well worth it!  I had previously seen Winter and Mickie James, and was excited to experience ODB, Sarita, Tara, Christy, and Gail from the front row.  I tend to vote for the villains and good or bad, Gail is my girl!  Gail won the WWE Women’s Championship in her debut match and was also the TNA Knockouts inaugural champion. Her feud with Awesome Kong is what brought me back to women’s wrestling when I had lost my weary way, and she is something to see – I don’t just watch her, I’m wowed by her.

I hold firm that in the future I will check Angelina and Velvet off my wrestling worksheet and I will have happily had the pleasure of seeing some amazing athletes perform.  I know what you’re thinking again – but what does this have to do with music?  Like I lamented in my last love-letter about this, wrestling has a rhythm.  It has timing and a beat.  Also, to be more literal and less abstract, the Knockouts also have theme songs!  I have coronated myself a member of Madison’s Queens Court, that’s what I’m calling her fan base, and she has a fitting theme:  “Killer Queen.”  Gail Kim’s is called “Puppet on a String.” My favorite, though, is The Beautiful People/ Velvet Sky’s theme, “Angel on my Shoulder.”  So whatever sport you’re attached to, whatever music is making its way to your ears, make the Knockouts part of your playlist and rock out with your favorite Knockout!